The Coal Pits is the second biome on the main path. It comprises a series of caverns extending through coal veins and rock, with occasional piles of coal and gunpowder and abandoned mining equipment. 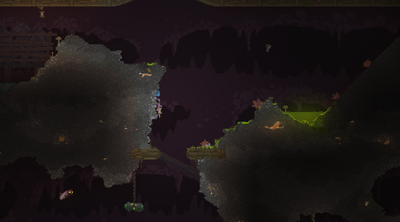 A typical entrance to Coal Pits

This biome consists mostly of thick sections of coal veins and rock with wide open passages, with wooden beams blocking off certain areas or providing platforms to stand on. The long tunnels are frequently dead ends which necessitates lots of backtracking to progress further, unless lots of explosives are used. Gold deposits litter the terrain which can be dug out with suitable spells (Chainsaw, Digging Bolt, Energy Orb, etc). Note that coal vein is much easier to dig through than grey rock. Deep pools of water are also abundant.

The area is also littered with rigid body minecarts, toxic explosive barrels and loose rocks. It also has toxic sludge tanks hanging from the ceiling, sea mines and platforms supported by chains, often with rocks and explosives on them.

The Coal pits feature several new creatures as well as other types of Hiisi, specifically:

Leaving the zone via the portals at the bottom will take you to the Snowy Depths.

An area of Fungal Caverns can be found to the west of the Coal Pits, featuring significantly more powerful wands than are found on the level, as well as many flasks, but also significantly deadlier enemies.