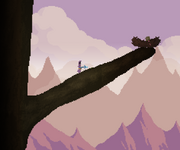 A branch with an egg on the Giant Tree

The Giant Tree is an enormous tree which is found a short distance west of the spawn point, the entrance to the Mines and the mountaintop. On its west side is the Snowy Wasteland.

The wood comprising the Tree is a different material to that normally found, much harder and more resistant to explosions than usual, as well as being impervious to fire and acid. Instead, to reach the other side, the player must use explosives, digging spells, a wands with spell recoil powerful enough to generate "thrust" for upwards flight, certain magical potions, or teleportation. It is also possible for a Worm to dig hole trough the Giant Tree or to the upper branches where you can easily levitate to the treetop.

The Tree currently does not spawn in Parallel Worlds.

At the base of the Tree is a pool of water which leads to an air pocket inside the tree. Inside is the Secretorum Hermetis. The entrance to the water may be blocked by terrain depending on the world seed, requiring a way to dig past it.

On its east face are branches at various heights that hold nests containing special eggs. The eggs in these nests will often be wiggling eggs, containing a worm of a random size. If the player navigates slightly above the level of the first nest, 10 Happonuljaska will spawn offscreen to the right and fall to the surface, providing a nasty surprise for unprepared players looking to walk back to the Mines.

The first branch on the east face is connected to an alcove that harbours the Curse of Greed challenge perk.

In the Noita 1.0 patch, in-game Achievement Pillars were added at the top of the giant tree.

Some explosive mushroom spore pods and a Music Machine can also be found on the left side of the treetop. 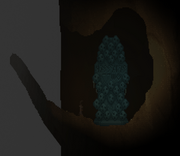 One of the branches on its west face leads to an alcove where the Bammalam monument can be found. This statue was added in celebration of Bammalam, who collected 552 Orbs of True Knowledge in 28 consecutive NG+s before successfully defeating the boss with 141 quintillion HP. The runes on the statue read "BAMMALAM 552 (orbs)" and depict 28 skulls of the final boss.

In the centre of the tree is an isolated area that needs to be reached by digging, containing the Kantele and its set of musical note spells.