From Noita Wiki
Jump to: navigation, search
A death caused by a giant worm Source: SlipKn0t95.

This creature may spawn by breaking the eggs on branches of the Giant Tree. May vary in size from very small to extremely large. There is also an aquatic version of this which spawns in the Lake. 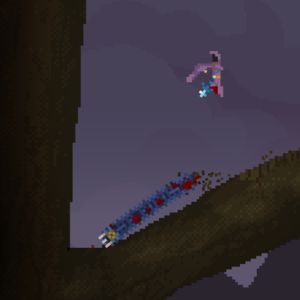 The worm in this picture is actually a tiny worm, but the worm is simply a larger version of this.

Worms can freely travel through any solids including brickwork and the material of the Giant Tree; the larger worms destroy them, leaving tunnels that the player can use.

Worms bleed worm blood, which when drank grants the temporary 'Wormy Vision' status effect that allows the player to see in the Dark Cave and also causes a colour shifting screen effect.

Should the player find themselves glitched or trapped completely in brickwork (such as a result of being polymorphed by chaotic polymorphine into a small or ethereal worm temporarily), a giant worm will spawn and attack.