A special spell obtained by repairing the Broken Spell at the Hiisi Base. Unless summoned in a specific spot in the Underground Jungle, the portal will destabilize and vanish, wasting a spell cast.

Examples of the Munkki statues

Within the Underground Jungle are four Munkki statues, each holding a staff vertically or horizontally. They are arrayed across the Jungle generally in North, South, East and West positions.

The staffs of the statues can be used to infer the location where Summon Portal will succeed in creating a stable portal. The North and South statues draw a vertical line, the East and West draw a horizontal line, and the stable area is around the intersection.

Within the portal, a wand of medium value and The End Of Everything spell can be found, along with a number of robotic enemies. 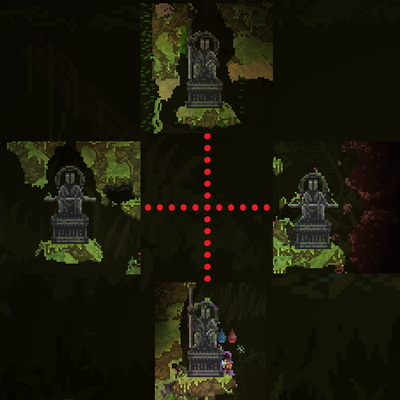 Imagine the four Munkki statues drawing an intersection with their staves to help locate the stable area for Summon Portal.
Retrieved from "https://noita.gamepedia.com/Summon_Portal?oldid=14056"
Categories: