Temple of the Art

From Noita Wiki
Jump to: navigation, search
Biome Navigation
The Vault
↑
Portal to The Tower
←

Temple of the Art

Exiting via portals from The Vault you will soon find yourself in the Temple of the Art, the final main dungeon biome before the fight with the boss in The Laboratory. 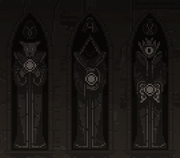 The Temple consists of both small and wide labyrinthian corridors, snaking back and forth throughout the biome with many splits. Oftentimes you will find piles of sand and/or wooden beams blocking your path, but by this point in the game such obstacles should be of no consequence. Dead ends are not uncommon, but usually there is not much need of backtracking for very long. Most often it's a question of choosing a different corridor which will lead you just a little further onwards.

The entire biome is constructed out of two different kinds of brickwork, with some pockets of rock and diamond deposits mixed it. The outer layer of brickwork is the same kind used in the Holy Mountain and cannot be dug through without powerful spells like Black Hole and Luminous Drill. Liberal use of Acid also works, but only downwards.

The inner layer of brickwork looks a bit different in color and texture and can be dug through using anything capable of carving up dense rock (which is most digging spells and explosives).

The Hiisi have completely abandoned this part of the dungeon, leaving only dangerous monsters behind:

You may also find some slightly rarer types:

Particular care should be taken when facing the Shapechanger and Master of Polymorphing, as their attacks can render you completely helpless. Generally, being struck by any other attack while polymorphed will be fatal, but the Shapechanger's polymorph is chaotic and may leave you in a slightly better position to avoid death if you're lucky.

In addition to all of these, the temple contains crystals that release various effects once damaged enough. The effect depends on the color of the crystal:

Other traps are common throughout the Temple, affixed to walls. Common trap types include:

The temple has 4 different connections, two direct and two blocked.