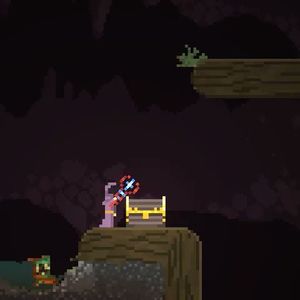 A treasure chest can be placed on the altar above the mountain for a special event. Unfortunately the chest is affected by gravity which makes the process of getting it there tedious and very difficult.

How to get it there?[edit | edit source]

There are a few methods to do it. The first one would be to kick the chest midair multiple times until it's high enough. Though technically possible it would be way too hard to do consistently.

The second way is much more doable but requires more setup in form of specific spells, items and perks. To properly pull this off you're going to need:

When you finaly have all that, this is what to do:

After placing the chest on the altar, it will disappear and the message "Your curiosity is rewarded" will appear. Then multiple treasure chests will start falling from the sky. Note that this event cannot be activated with the chests that it spawned but can be repeated as long as there are normal chests left.